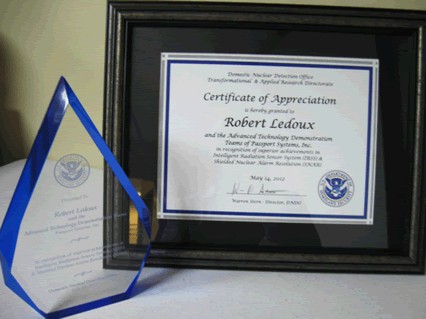 “We are honored to receive this recognition from DNDO,” said Dr. Robert Ledoux.  “Since September 11, 2001, the threat of terrorism has become real to Americans.  Our mission is to develop the technologies needed to detect threats with speed and accuracy without slowing the flow of commerce.  We are proud that we are able to help keep Americans safe.”

Passport Systems, Inc. continues to develop technologies used by the DHS to protect Americans from radiological and nuclear threats.  The IRSS networks a group of portable radiation detectors, to work more quickly and accurately than a group of non-networked detectors, to detect, localize and identify radiological materials in a particular area.  The flexible network structure provides the ability for advanced monitoring capabilities across a large coverage area.

A SNAR system was developed by Passport Systems, Inc. under contract with DNDO to examine the contents of cargo containers at ports of entry for threats and contaband.  SNAR uses high-energy X-Rays to scan containers and automatically determine physical signatures that uniquely identify materials inside the containers that could potentially be used to make nuclear weapons or to shield nuclear weapons from detection.

About IEEE SORMA West
SORMA West 2012 was organized by Lawrence Berkeley National Laboratory and the University of California, Berkeley. As one of the premier conferences on radiation in the world, SORMA offers unparalleled access to leaders in the field of radiation detector development and the leveraging of these detectors to both fundamental and applied problems in physics, chemistry and engineering.

About Passport Systems, Inc.
Based in Billerica, Mass., Passport Systems, Inc. is developing next generation scanner solutions to be deployed at air and sea ports, border crossings and other key points in the global supply chain to non-intrusively and accurately inspect cargo without impeding the flow of commerce.

Any cookies that may not be particularly necessary for the website to function and is used specifically to collect user personal data via analytics, ads, other embedded contents are termed as non-necessary cookies. It is mandatory to procure user consent prior to running these cookies on your website.